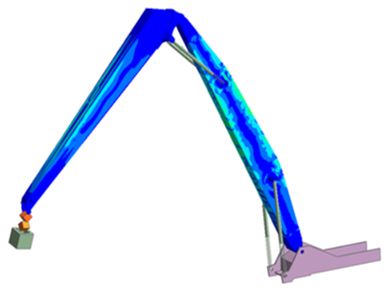 In engineering jargon, acronyms like FEA and CFD (Finite Element Analysis and Computational Fluid Dynamics) are very well known. However, far fewer know what that MBD stands for Multibody Dynamics and that this branch of engineering simulation studies the behavior of virtual prototypes of mechanical systems. Being able to reduce the number of physical prototypes obviously reduces cost and time to market significantly. Several industries have successfully leveraged MBD in the product development cycle with the automobile industry being a prominent example. Here, MBD has played a big role e.g. in the development of suspension systems and in the development of power train mechanisms. Advanced MBD models can consider the effect of compliant joints such as rubber bushings to create a realistic picture of the suspension system behavior. With the design wheel travel as model input, all dynamic information such as displacements, velocities, accelerations and forces are available at any point in the system as output.

Apart from the automotive industry, all machine manufacturers can potentially benefit from MBD simulations. E.g. in designing a boom lifter, known data is the required maximal lift load and the range of motion as well as the design work cycle speed. Given the dynamic conditions of the system, behavior of the hydraulic system etc., exact dynamic loads can be hard to predict. Here, MBD simulations can give valuable input. Also, given the computer model of the dynamic system, several design concepts can be tested in a short timeframe.

Animation: Color coded von Mises stresses and numerical values shown at selected points in the boom during a work cycle.