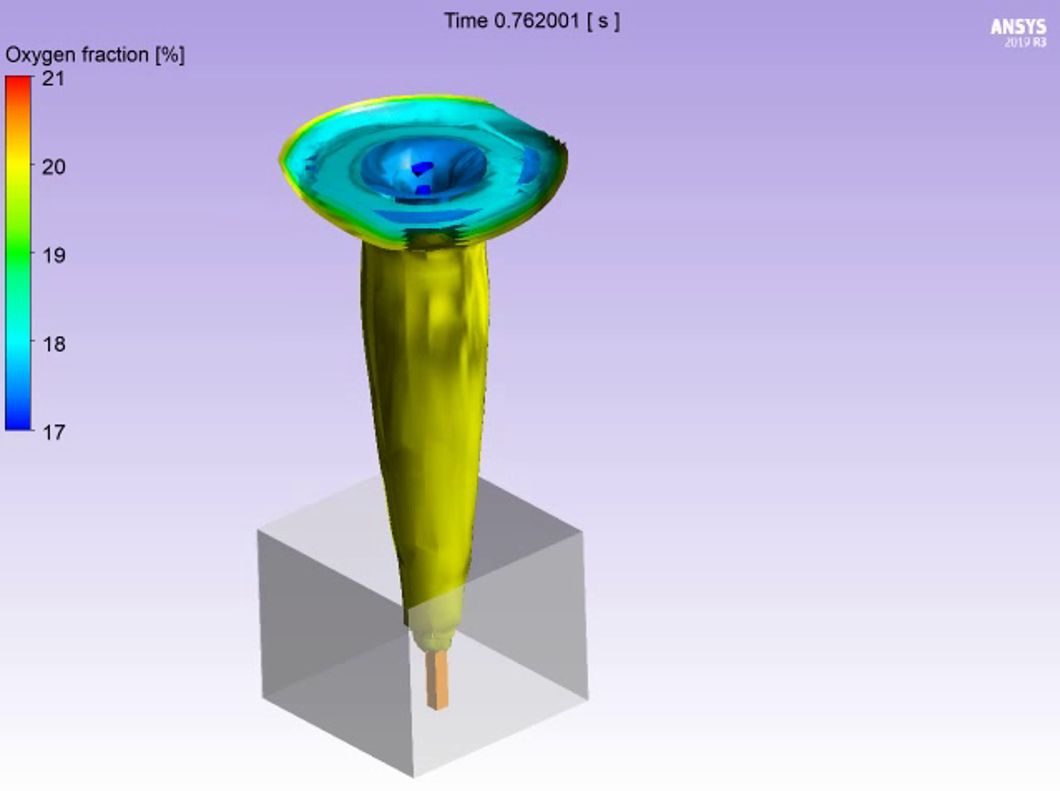 As part of the risk assessment for a high-pressure valve testing facility, Metso Flow Control Oy wanted to simulate valve failures and the resulting impacts on the oxygen and noise levels in the facility. The project is a continuation of the FE analysis of detached valve fragments’ impact on the surrounding walls.

The goal was to determine the effects of the high-pressure gas release on the test facility oxygen concentration. In addition, the sound level caused by the gas release was to be calculated. Two types of flow media were considered in different leak type conditions, which lead to multiple simulations.

Each case was split into two parts:

The approach by Croaker et al. (2011) was used in which the main inputs are the turbulent kinetic energy of the flow field as well as its dissipation rate. The result is a conservative approximation, as dampening in structures was not considered.

Part 1: The highest valve test pressure was used as initial condition. At time t=0, the valve failure was set to occur, and the released gas mass flow rate was observed as a function of time. The fine mesh and correspondingly needed small time step prohibited simulating the whole gas release event until equilibrium. As a result, a conservative estimate for the release rate function was made based on the initial simulated time-dependent mass flow rates. Aeroacoustic noise maximum was calculated in this phase, because noise maximum occurs at the highest flow rates and simulating it required a high spatial resolution. Figure 1 shows an example of acoustic sound caused by a leak.

Figure 1. Aeroacoustic sound power and pressure levels in an early phase of leak.

Part 2: It is possible to calculate a rough estimation of room oxygen deficiency based on the Part 1 simulations only, but the local oxygen levels need to be resolved by further simulations to ensure conservatism. The time dependent mass flow rate determined in Part 1 was used as input in the room oxygen level simulations and the transient simulation was run until the effect on the facility oxygen levels could be clearly determined. See Figure 2 below for snapshots of an event.

The results helped distinguish the valve and failure combinations that could require special safety measures.

Figure 2. Snapshots of Oxygen fractions in a leaking valve case. In this case, cell will remain safe as the jet is directed strongly upwards.